It began when I traced time in the condensation gathered on the windowsill. 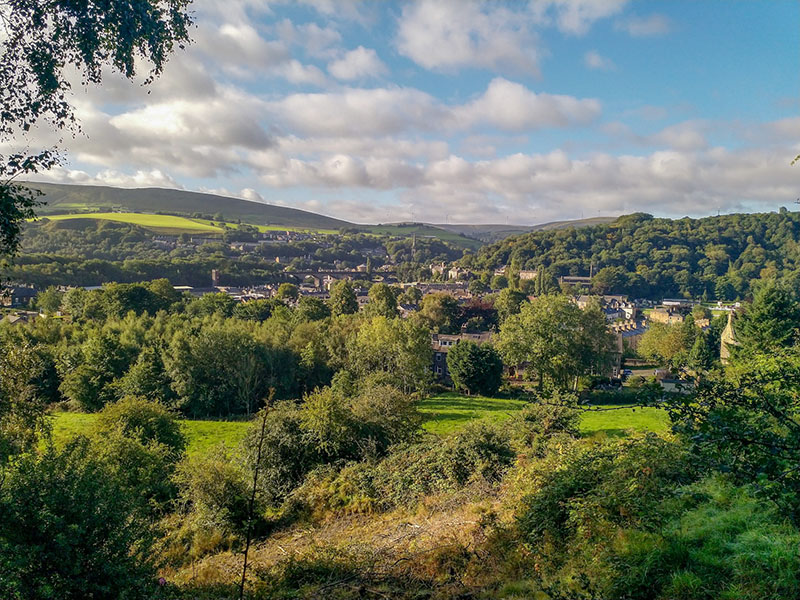 My working day usually starts with a “commute”: a circular walk from the house taking in Royd Lane, up a slight hill, down a steeper hill, then back up a moderately steep hill again, then home (this route order changes; to mix it up a bit, you can do it counterclockwise!). I’m a fair-weather commuter, travelling when the mood takes me.

I’ve felt fatigued since lockdown started, I think it’s down to stress and worry mainly. Anxiety is never far away. I’ve been feeling a little worse this week so thought I’d best get checked out. I am fine, of course, the worry chips away at me, though. I worried this morning whether it was hypochondriac to be hypochondriac.

These daft circular worries, constantly rippling out, the repeated weary sensation of what now? Feeling angry and dismayed about the country that I live in. Being part of the world and yet not feeling like I’m of it; feeling like I am unable to effect any significant change. Watching the unfolding horrors of the climate crisis – wildfire, soil erosion, water stress – observing biodiversity collapse in motion. Where are the oak galls? Where are the small tortoiseshells that we had an abundance of last year?

Shifting colours, becoming something else, wondering what comes next.

‘Originally erected 1815 to commemorate the surrender of Paris to the Allies after the Napoleonic Wars. Rebuilt, after collapse, to a new design by John Green (Portsmouth, Todmorden) in 1856 by public subscription. Restored 1889.’ Historic England 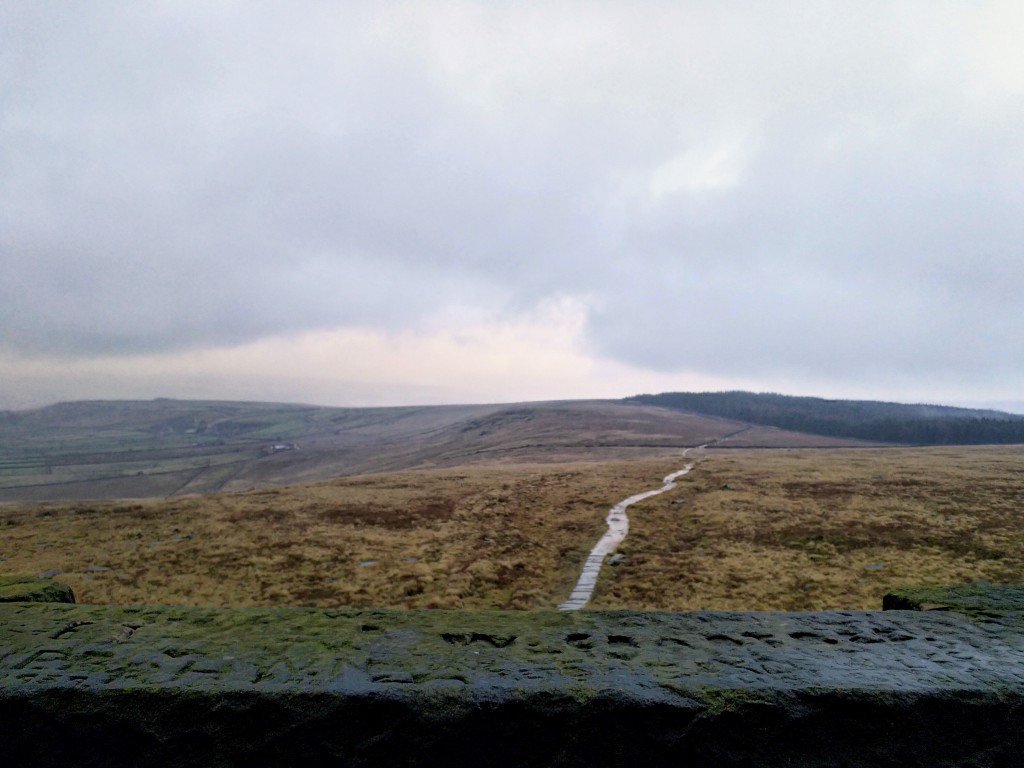 View from Stoodley Pike to the eastern track of the Pennine Way.

Stoodley Pike, obscured by the clouds from the bottom of the valley. Pronounce it “stud-lee”. Victory monument, a stocky stone peace memorial. Ascend from Mankinholes Bank from the busy, pedestrian-unfriendly, Causeway Wood Road. Slip down Lee Lane, take a left near Lee Dam (observe a group of wild swimmers preparing to bring in the New Year through goosebumps when they dash into the icy waters). Squelch through the muddy bridleway, past Incredible Farm (site of organic growing, site of heated debate on online fora). Up to the stone flags past the sheep (Swaledale? Rough Fell? Lonk?) and a photogenic ram. 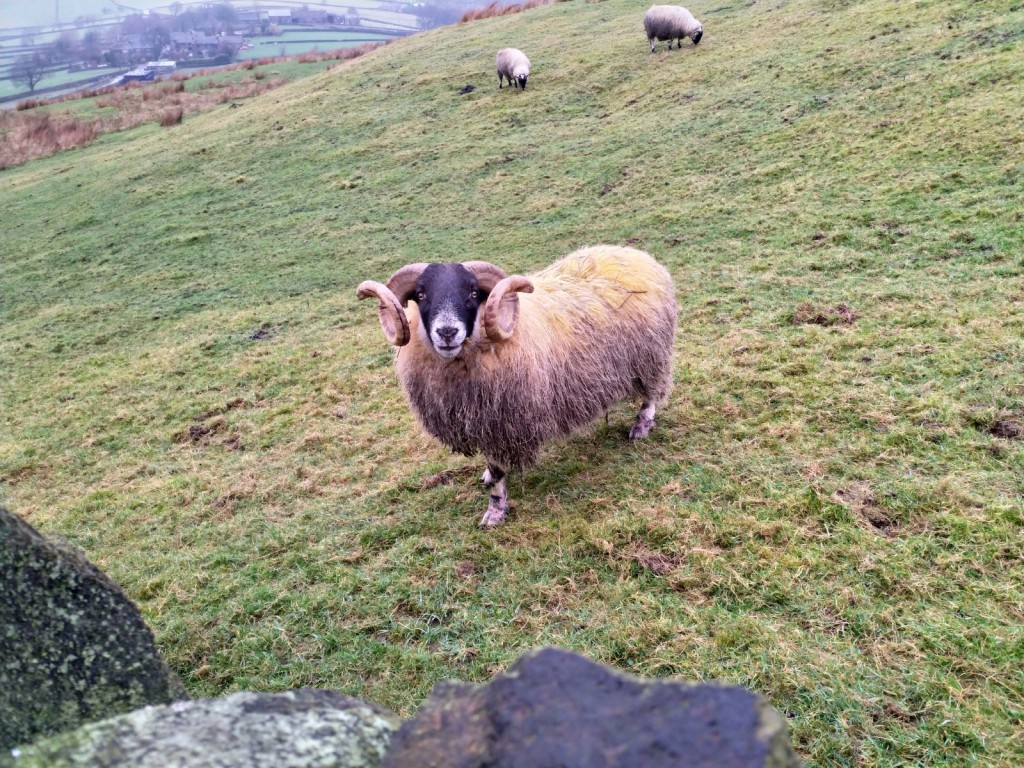 See him pose for a few photographs before he shakes his tail and trots off to find better grasses to chew.

It’s sheltered along the wall but the gentle mizzle provides a gossamer veil over my glasses.

Follow the path, the flat flags, the gritted surfaces maintained by Calderdale Council (signs decree that no mountain bikes are allowed nor horse riding along certain parts of the Pennine Way). Some of the nearby surfaces are carved by intertwining thick lines, telltale cycle tracks. This is no wild landscape; it’s carefully maintained and gleefully used. Even if I tried to avoid it, following this path to the Pike is inevitable. 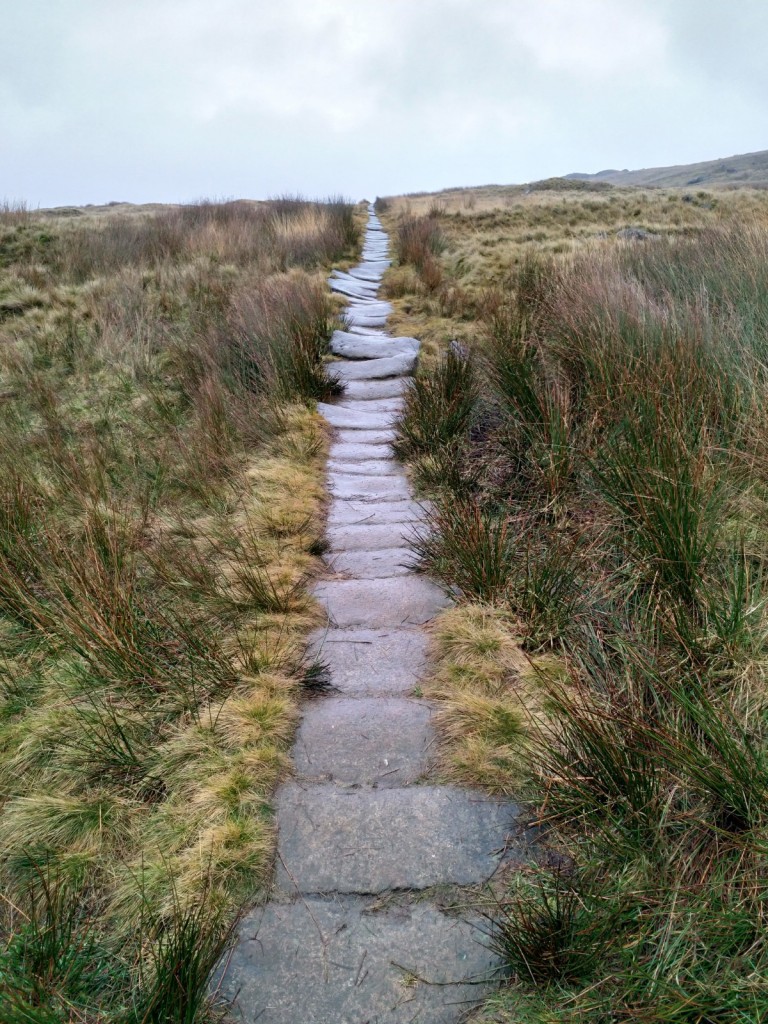 The flagstones of the Pennine Way from the southeast approach to Stoodley Pike.

These flat, uneven teeth bisect the field. Looking around see how the grasses sweep back in the wind like hair. Like a comb-over. The blond and russets yield in this extreme breeze. 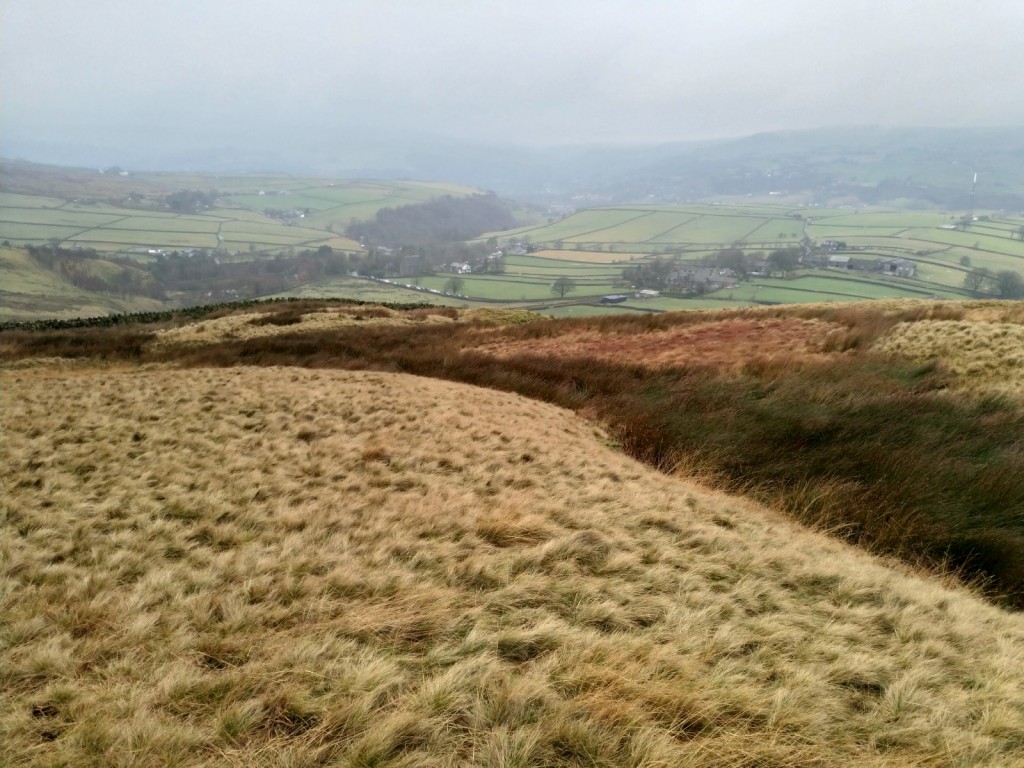 Approach the pike from the southwest like our ramble, or the steep, precarious northwest. Or from the east, the way from Cragg Vale. Approach it with your eyes down to the ground against the wind, the ends of your fingers reddening in gloves. (You may feel almost a tingling sunburn feeling on your face later from the relentless wind.) Leap onto the erratic boulders that jut out, avoid the peaty mulch of the ground between the gritstone rocks. Be grateful that this isn’t tick (Ixodida) season. But do wonder where the insects are as you stare down. Stumble the last few hundred metres to the pike. Shelter on the eastern side from the wind, pass and say hello (many “hellos”, many “nice weather for it!”s). Clamber up the dark spiral staircase – bring a head torch! – within the pike and risk a lookout over the barrier, take a picture in spite of this tumultuous weather. And consider the route down to the market town. But first, before returning, consider the nearby pub to defrost and have a pint to celebrate a kind of success. 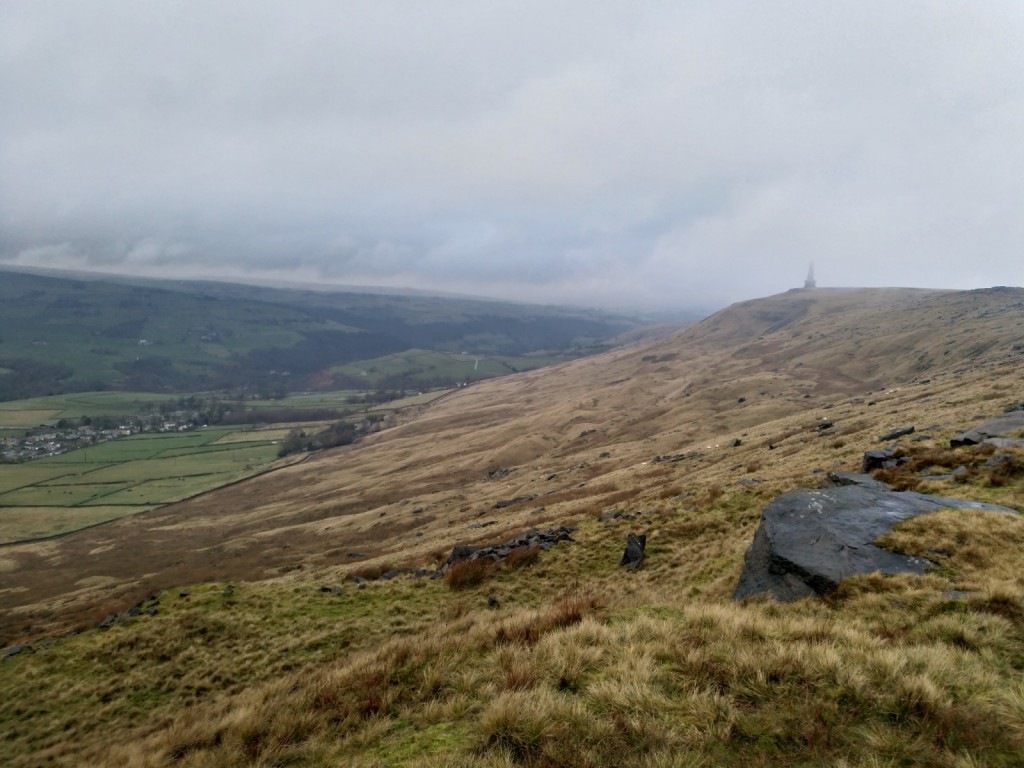 Life in a cloud.

—
I’ve lived in Calderdale for nearly three years now and hadn’t visited Stoodley Pike. Which is daft, really, as it is a less scrambly venture than several other walks I’ve done since living here. Time slips past, wind through the grass.

I know it’s been a while, nearly two years, since I last blogged. There are myriad reasons for this. (Life happened, basically, as well as other reasons including bouts of fatigue, job hunting, losing my writing groove a little post-PhD.) I know this is imperfect; the grammar is all over the shop for one thing! But this is a way back into writing, a way back into blogging. Well-worn but it works. (Not that I’m ever worried about experimenting and going off-piste rather than off pissed.)

And in a world that’s increasingly frightening, I’d like to find my path back to being able to process and write about things in a way that could be helpful for others. (Either through creating, either through signal boosting information.) So yes, I’m following familiar metaphorical paths (writing, activism, making) but implementing some changes along the way as well as trying to not overstretch myself which I’ve had a nasty habit of doing to the stages of burnout over the years. To stretch the walking metaphor further: I’m exploring the many erratic boulders of ideas that are poking up in my mind. Observing, following, or willfully neglecting any waymarkers – to stretch that metaphor to absolute breaking point. I’m changing direction, a little, in that my online presence is changing. This site will now be dedicated to blogging which will include writing anything I like, reflecting on creative practice, sharing ideas (which I really hope get some engagement as I love a good debate), and keeping notes for folkloric work I’m planning to do during this year. The latter will be just for fun, just to keep making and exploring some creative pieces that I’m not sure fit anywhere, also I want to sing and make music again. This creative work may not lead to anything but I know I will put my heart into it as there’s no pressure and so no anxiety over it being “perfect”. (Whatever “perfect” is anyway.)

Academic work, research, tutoring, and what I consider – possibly somewhat flippantly – the “grown-up, professional stuff” will live on the other website for now. I may integrate the two in the future, I may not. The URL £ rent isn’t mega on either so they’ll be separate for now. As for posting, I am working on having loosely scheduled writing going out. I do still offer freelance project/ad hoc work, but I’m employed in two different – but not completely unrelated – jobs where I’m on a casual contract so any planning is mostly on a week-by-week basis in the short term.

Until then, I hope all is is well in your worlds and that you can safely get out into the elements at some point.