It’s still raining today, more vertical than diagonal today. The back garden is slowly turning into a marsh. I wonder whether Calderdale will turn into a giant lake with its own Nessie myths. I’m feeling rounded, fleshy, the feeling that I’m gathering hibernation weight for what could be a long winter ahead. Ah, the ingrained fatphobia that’s been handed down, matrilineal.

Let’s get the heavy stuff over with, this post comes with a bit of a content note: it will be about body image, about weight, about that feeling when you feel like you don’t fit. About fat. About perceptions of fat. About trying to control fat in questionable ways.

I have always been overweight. Even at my thinnest I had a soft peach belly roll that pushed against the size 10 jeans I’d borrowed from a friend and just about managed to squeeze into with shallow breaths and a sense of shame. That shame. That bloody shame from those who don’t matter, or the shame that has come from two generations of women ashamed of their bodies. Taking supplements, starving, being sick to fight the flab, to be considered, perhaps (whisper it) sexy.

I tried to fight back against this learned behaviour. I did my best to question the crappy images fed into my head from the TV and make-up promotion heavy magazines aimed at young women. I tried to ignore the ribs and rounded orbs of Eva Herzigová looking down from those 90s roadside Wonderbra adverts. In my early twenties, I got my belly button pierced, I (sort of) embraced the curves on the good days. And I wrote: poems, feminist poems about ‘getting grief from a lettuce leaf’, a news article about posing naked for a charity calendar – modesty protected by three cardboard bees Penned a performance poem about not giving a toss about body shape and embracing body hair (performed with some serious beer courage). I ended a relationship with someone who made me feel awful and like the worst person who dragged herself across the surface of the earth.

The familiar feeling, the fat-shaming, the magazines located in what I call the ‘Self Hate’ section of newsagencies. (You know the ones: the magazines where one week they’re celebrating curvy celebrities, the next pointing out the stretch marks, every single line of cellulite, expressing mock concern and barely concealed disgust.)

Of course, it’s all rubbish; it’s about being healthy (and hopefully happy) whatever the size of your thighs. As I enter into my fifth decade, I am hoping that I care less about how I look and more about who I am, how my actions affect others, how I can speak out and listen and champion others who may feel similar. 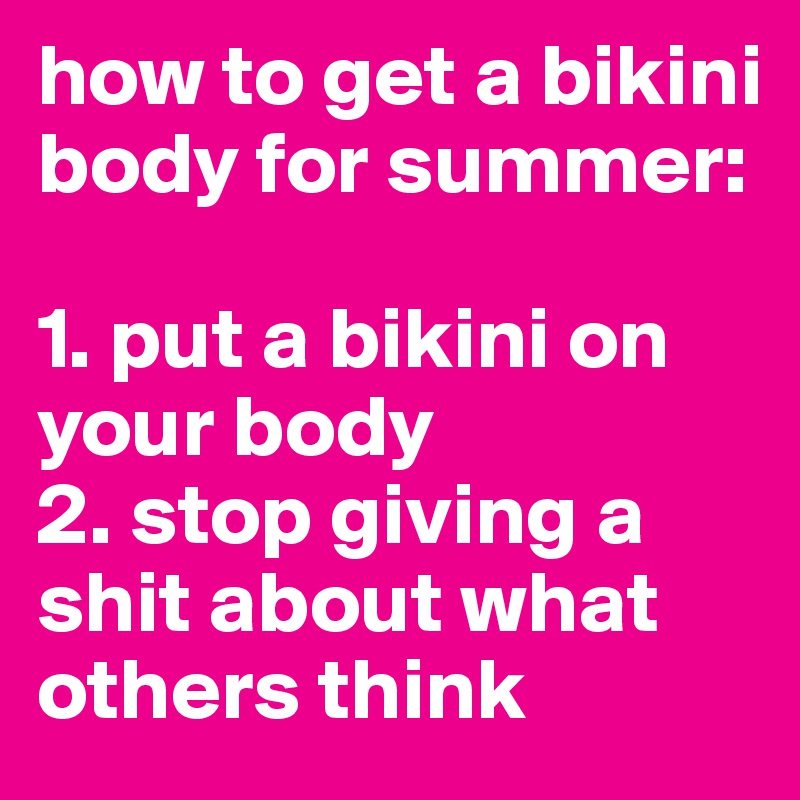 (I’d add a 3 which is it’s no-one else’s flipping business what you’re wearing! Whether it’s tankini or mankini!)